One of the high costs that we have right now in my Redis Clone is strings. That is actually a bit misleading, take a look here: 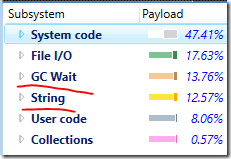 Strings take 12.57% of the runtime, but there is also the GC Wait, where we need to cleanup after them. That means that the manner in which we are working is pretty inefficient.

Our test scenario right now also involves solely GET and SET requests, there are no deletions, expirations, etc. I mention that because we need to consider what we’ll replace the strings with.

The simplest option is to replace that with a byte array, but that is still managed memory and incurs the costs associated with GC. We can pool those byte arrays, but then we have an important question to answer, how do we know when a buffer is no longer used?

Consider the following set of events:

In this case, we have thread #2 accessing the value buffer, but we replaced that buffer. We need to let thread #2 keep using this buffer until it is done.

This little tidbit put us right back at concurrent manual memory management, which is scary. We can do things in a slightly different manner, however. We can take advantage of the GC to support us, like so:

The idea is pretty simple. We have a class that holds a buffer, and when the GC notices that it is no longer in use, it will add its buffer back to the pool. The idea is that we rely on the GC to resolve this (really hard) problem for us. The fact that this moves the cost to the finalizer means that we can not worry about this. Otherwise, you have to jump through a lot of hoops.

The ReusableBuffer class also implements GetHashCode() / Equals() which allow us to use it as a key in the dictionary.

Now that we have the backing store for keys and values, let’s see how we can read & write from the network. I’m going to go back to the ConcurrentDictionary implementation for now, so I’ll handle only a single concept at a time.

Before, we used StreamReader / StreamWriter to do the work, now we’ll use PipeReader / PipeWriter from System.IO.PIpelines. That will allow us to easily work with the raw bytes directly and it is meant for high performance scenarios.

I wrote the code twice, once using the reusable buffer model and once using PIpeReader / PipeWriter and allocating strings. I was surprised to see that my fancy reusable buffers were within 1% performance of the (much simpler) strings implementation. That is 1% in the wrong direction, by the way.

On my machine, the buffer based system was 165K ops/second while the strings based one was 166K ops/sec.

I’m guessing that the allocation pattern is really good for the kind of heuristics that the GC does. We either have long term objects (in the cache) or very short term ones.

It’s worth pointing out that the actual parsing of the commands from the network isn’t using strings. Only the actual keys and values are actually translated to strings. The rest I’m doing using raw bytes.

Here is what the code looks like for the string version under the profiler:

And here is the same thing using the reusable buffer:

There are a few interesting things to note here. The cost of ExecCommand is almost twice as high as the previous attempt. Digging deeper, I believe that the fault is here:

This is the piece of code that is responsible for setting an item in the dictionary. However, note that we are doing a read for every write? The idea here is that if we have a set on an existing item, we can avoid allocating the buffer for the key again, and reuse it.

However, that piece of code is in the critical path for this benchmark and it is quite costly. I changed it to do the allocations always, and we got a fairly consistent 1% – 3% faster than the string version. Here is what this looks like: 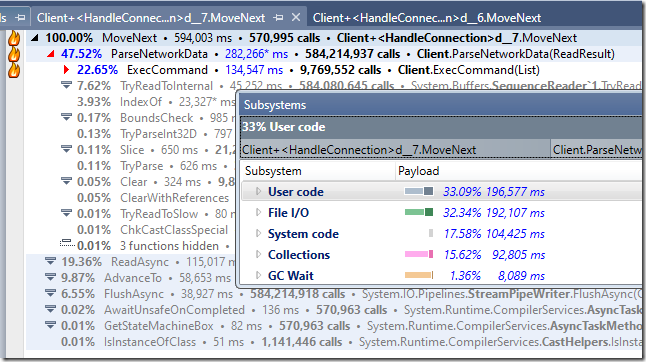 In other words, here is the current performance table (under the profiler):

All of those numbers are under the profiler, and on my development machine. Let’s see what we get when I’m running them on the production instances, shall we?

Those results do not match with what we see in my development machine. The likely reason is that the amount of operations is high enough and the load is sufficiently big that we are seeing a much bigger impact from the memory optimization at scale.

That is the only conclusion I can draw from the fact that the memory reduction code, which adds costs, is actually able to process more requests/seconds under such load.

Architectural optimizations vs the profiler