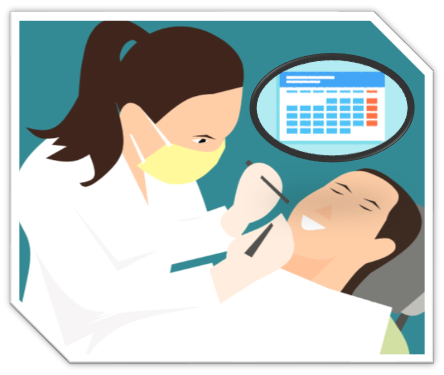 My first project as a professional software developer was to build a scheduling system for a dental clinics chain. That was a huge project (multiple years) and was really quite interesting. Looking back, I have done a lot of really cool technical things there. I also learned quite a lot from that project. The danger of complexity being one of the chief issues.

Consider a dental clinic, where we have the following schedule for a dentist:

The task is to be able to schedule an appointment for the dentist given those rules.

In addition to the schedule of the dentist, we also have actual Appointments, those looks like this:

Assume that you have quite a few of those, and you want to schedule a new appointment for a patient. How would you do that? I’m a database guy, let’s see if I can specify the task as a query?

The complexity here is that we need to search for something that isn’t there.

I actually found some of my posts on this topic, from 2006. That isn’t a simple problem. And the solution is usually to generate the missing data and query on that. My old posts on the topic actually generate an in memory table and operate on that, which is great for small datasets, but will fail in interesting ways for real world datasets.

All of that is because of two issues:

These two points are strongly related to one another. Consider how you would schedule a dentist appointment. You first need to find the rough time frame that you need (“come back in six months”) and then you need to match it to your schedule (“I can’t on Monday, I got the kids”, etc).

There is a better way to handle that, by filling in the missing pieces. Instead of trying to compute the schedule of a dentist from the specification that we have, go the other way around. Generate the schedule based on the template you have. The result should be something like this:

In other words, based on the schedule provided, we’ll generate an entry per day for the dentist. That entry will contain the appointments for the day as well as the maximum duration for an available appointment. That means that on query time, we can do something as simple as:

And that gives us the relevant times that we can schedule the appointment. This is cheap to do, easy to work and it actually matches the common ways that users will use the system.

This has a bunch of other advantages, that are not immediately apparent but end up being quite important. Working with time sucks. The schedule above is a nice guideline, but it isn’t a really useful one when you need to run actual computations. Why is that? Well, it doesn’t account for vacations days. If there is a public holiday on Wednesday, the dentist isn’t working, but that is an implied assumption in the schedule.

For that matter, you now need to figure out which calendar to use. A Christian and a Jewish dentist are going to have different holiday calendars. Trying to push that into a query is going to be quite annoying, if not impossibly so. Putting that on the generator simplifies things, because you can “unroll” the schedule, apply the holiday calendar you want and then not think about it.

Other factors, such as vacation days, reserved time for emergencies and similar issues make it a lot easier to manage in a concrete form. Another important aspect is that the schedule changes, for any decent size clinic, the schedule changes all the time. You may have the dentist requesting to close a couple of hours early on Monday because of a dance recital and add more hours on Thursday. If the schedule is generated, this is a simple matter to do (manual adjusting). If we have just the schedule template, on the other hand… that becomes a lot more complex.

In short, the best way to handle this is to take the template schedule, generate it to a concrete schedule and operate from that point on.