Production post-mortem: Too much RAM and the unstable cluster

A customer reported that on their system, they suffered from frequent cluster elections in some cases. That is usually an indication that the system resources are hit in some manner. From experience, that usually means that the I/O on the machine is capped (very common in the cloud) or that there is some network issue.

The customer was able to rule these issues out. The latency to the storage was typically withing less than a millisecond and the maximum latency never exceed 5 ms. The network monitoring showed that everything was fine, as well. The CPU was hovering around the 7% CPU and there was no reason for the issue.

Looking at the logs, we saw very suspicious gaps in the servers activity, but with no good reason for them. Furthermore, the customer was able to narrow the issue down to a single scenario. Resetting the indexes would cause the cluster state to become unstable. And it did so with very high frequency.

“That is flat out impossible”, I said. And I meant it. Indexing workload is something that we have a lot of experience managing and in RavenDB 4.0 we have made some major changes to our indexing structure to handle this scenario. In particular, this meant that indexing:

The entire thing didn’t make sense. However… the customer did a great job in setting up an environment where they could show us: Click on the reset button, and the cluster become unstable.  So it is impossible, but it happens.

We explored a lot of stuff around this issue. The machine is big and running multiple NUMA node, maybe it was some interaction with that? It was highly unlikely, and eventually didn’t pan out, but that is one example of the things that we tried.

We setup a similar cluster on our end and gave it 10x more load than what the customer did, on a set of machines that had a fraction of the customer’s power. The cluster and the system state remain absolutely stable.

I officially declared that we were in a state of perplexation.

When we run the customer’s own scenario on our system, we saw something, but nothing like what we saw on their end. One of the things that we usually do when we investigate resource constraint issues is to give the machines under test a lot less capability. Less memory and slower disks, for example, means that it is much easier to surface many problems. But the worse we made the situation for the test cluster, the better the results became.

We changed things up. We gave the cluster machines with 128 GB of RAM and fast disks and tried it again. The situation immediately reproduced.

Why would giving more resources to the system cause instability in the cluster? Note that the other metrics also suffered, which made absolutely no sense.

We started digging deeper and we found the following index:

It is about as simple an index as you can imagine it would be and should cause absolutely no issue for RavenDB. So what was going on? We then looked at the documents… 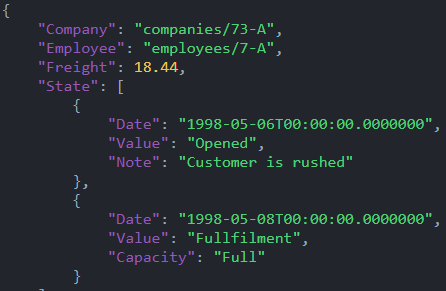 I would expect the State field to be a simple enum property. But it is an array that describe the state changes in the system. This array also holds complex objects. The size of the array is on average about 450 items and I saw it hit a max of 13,000 items.

That help clarify things. During index, we have to process the State property, and because it is an array, we index each of the elements inside it. That means that for each document, we’ll index between 400 – 13,000 items for the State field. What is more, we have a complex object to index. RavenDB will index that as a JSON string, so effectively the indexing would generate a lot of strings. These strings are going to be held in memory until the end of the indexing batch. So far, so good, but the problem in this case was that there were enough resources to have a big batch of documents.

That means that we would generate over 64 million string objects in one of those batches.

The GC will be invoked based on how many allocations you have (in this case, a lot) and how many live objects you have. In this case, also a lot, until the index batch is completed. However, because we run GC multiple times during the indexing batch, we had promoted significant numbers of objects to the next generation, and Gen1 or Gen2 collections are far more expensive.

Once we knew what the problem was, it was easy to find a fix. Don’t index the State field. Given that the values that were indexed were JSON strings, it is unlikely that the customer actually queried on them (later confirmed by talking to the customer).

On the RavenDB side, we added monitoring for the allocation frequency and will close the indexing batch early to prevent handing the GC too much work all at once.

The reason we failed to reproduce that on lower end machine was simple, RavenDB already used enough memory so we closed the batch early, before we could gather enough objects to cause the GC to really work hard. When running on a big machine, it had time to get the ball rolling and hand the whole big mess to the GC for cleanup.