I had a long conversation with a dev team that are building a non trivial business system. One of the chief problems that they have to deal with is that the “business logic” that they are asked to work with is extremely mutable, situation dependent and changes frequently. That isn’t a new compliant, of course, but given that I have run into this in the past, I can deeply emphasize. The key issue is that the business rules (I refuse to call it logic) are in a constant state of flux. Trying to encode them into the software itself leads to a great deal of mess in both the code and architecture.

For example, consider the field of insurance. There are certain aspects of the insurance field that are pretty much fixed in stone (and codified into law). But there are (many) others that are much more flexible, because they relate to the business of selling insurance rather than the actual insurance itself. Because certain parts of the system cannot change (by law), all the modifications happen in other places, and those places see a lot of churn.

A marketing executive came up with a brilliant idea, let’s market a health insurance policy for young athletic people. This is the same as the usual young policy, but you get a 5% discount on the monthly premium if you have over 20 days in the month with over 10,000 steps recorded. Conversely, you get penalized with 5% surcharge if you don’t have at least 15 days of over 10,000 steps recorded. Please note that this is a real service and not something that I just made up.

Consider what such a feature means? We have to build the integration with FitBit, the ability to pull the data in, etc. But what happens next? You can be sure that there are going to be a lot more plans and offers that will use those options. You can envision another offer for a policy that gives discounts for 40+ who jogs regularly, etc.

What does this kind of thing looks like in your code? The typical answer is that this can be one of a few options:

In many cases, organizations start as the 2nd option and turn into the 1st.

In the early 2000, cellular phones plans in Israel were expensive. A family plan could cost as much as a mortgage payment. I’m not kidding, it was really that bad. One of the cellular companies had an inherent advantage, however. They were able to make new offers and plans so much faster than the companies.

All sort of stuff like that, and that worked. Some people would switch plans on a regular basis, trying to find the optimal option. The reason that this company was able to do that had to do with the manner in which they did billing.

What they did was quite amazing, even decades later. Their billing systems aggregated all the usage of a particular plan based and pushed that into a report. Then there was a directory filled with VBScript files that they would run over the report. The VBScripts were responsible for apply the logics for the plans. The fact that they wrote them in VBScript meant that they had a very well defined structure. There was all the backend work that gathered the data, then they applied the policies in the scripts. Making those kind of changes and introducing new policies was easy.

If the technique is familiar to you, that is because I talked about this in the past. In fact, I wrote a book about it. But this isn’t the time to talk about a book a dozen years old or a story from twenty years ago. Let’s talk about how we can apply this today, shall we?

For scripting, I’m going to use MoonSharp, which is a managed Lua implementation. Lua is a great scripting language, it is quite capable and at the same time usable for people without too much technical knowledge. Among other things, it also offers builtin debugging support, which can be a crucial feature for large scale systems.

At any rate, let’s consider the following logic:

As you can see, this script raise the monthly rate for a house insurance policy in a particular location. To execute this code, you’ll need something like:

Those are the mechanics of how this works. How you can use MoonSharp to apply arbitrary logic to a policy. As I mentioned, I literally wrote a book about this, discussing many of the details you need to create such a system. Right now, I want to focus on the architecture impact.

The kind of code we’ll write in those scripts is usually pretty boring. Those are business rules in all their glory, quite specific and narrow, carefully applied. They are simple to understand in isolation, and as long as we keep them this way, we can reduce the overall complexity on the system.

Let’s consider how we’ll actually use them, shall we? Here is what the user will work with to customize the system. I’m saying user, but this is likely going to be used by integrators, rather than the end user. 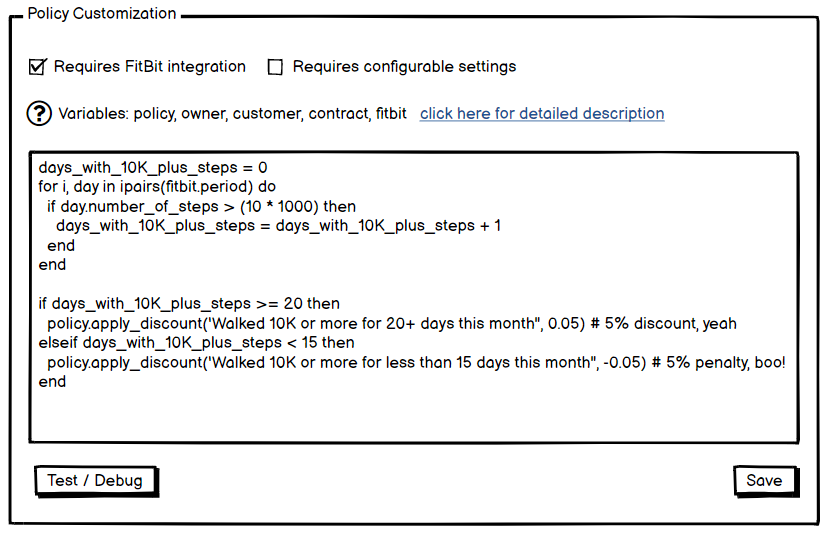 That data is then going to be stored directly in our Policy object, and we can apply it as needed. A more complex solution may have the ability to attach multiple scripts to various events in the system.

This change the entire manner of your system, because you are focused on enabling the behavior of the system, rather than having to figure out how to apply the rules. The end result is that there is a very well defined structure (there has to be, for things to work) and in general an overall more maintainable system.